I can’t remember if Cutter and I met during a fire drill or through friends. Somehow we met. What I do remember is that he lived by Fenway Park and was an easy walk to/from campus and an even easier T-ride. 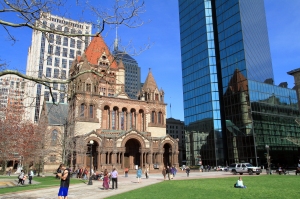 He had a video editing internship in Copley Square and invited me to meet him for lunch at his office when his hours were over. I was excited to actually know someone who worked in one of those fancy offices and proudly walked past the throngs of people going to the grocery store that was in the same building. Too timid to go into his office and not wanting to get him in trouble for having a visitor, I waited outside the office doors. When he he came out, he greeted me with an awkward “we just started dating” hug and kiss. Then we walked to his apartment, which was about fifteen minutes away.

He lived in a second story walk up and when we got back to his place, the mid-day spring sunlight was streaming in casting beautiful light along the exposed brick walls. He offered me a chair by the wet bar so we could easily talk while he made lunch.

Lunch was fresh mozzarella, tomato, basil, olive oil with a splash of balsamic vinegar. I found it to be incredibly elegant. I also later found out it was a simple caprese salad. It doesn’t matter it was “simple.” This is the first caprese salad anyone ever made me. And, he purchased all the ingredients from Boston’s historic Farmers’ Market. (*Bonus points.)

The same spring light that made the brick look so good made Cutter look even better. With his blond hair and butter yellow shirt, he was nearly glowing. I was enraptured. I was having a great conversation with a cute boy who was making me lunch. No one had ever done this. We were at peace and we were alone.

Then, a roommate walked in from a bedroom— It was one of my friends from the Broadcast Journalism School. I’m not sure who was more shocked. My friend and I typically talked TV production and the Red Sox. The most personal we ever got career goals. We were both caught off guard that he saw this other, more vulnerable, side of me. We made small talk and then he left. My friend and I never spoke about that day.

When we were finally alone, Cutter announced lunch was ready. He continued to amaze. He opened the living room window and we climbed onto the porch a previous tenant had constructed. We were going to have a spring picnic!

It was a perfect lunch and a warm memory, but summer was around the corner. We saw each other a couple more times, our talks got further between, and then I graduated. Neither he nor I officially ended anything. We just kind of drifted apart. I never saw any of the stuff he edited. I don’t know if he has siblings. I’m not even sure where he’s from. It’s not that he wasn’t nice, we just came into each other’s lives when we were both under the crunch of finals and life transitions. People today would classify our few encounters as “hanging out.” Heck, even then, people probably called it hanging out. But, to me it was dating, even if it was casual.

It doesn’t matter how you want to label it, what Cutter showed was kindness. And, most importantly, yes, there are guys out there who like cooking.

Epilogue
Several weeks ago (ironically 13 years to month we drifted apart), I was at an alumni event in Los Angeles and saw Cutter. We were watching a live-stream event our alma mater was webcasting. While trying to watch the screen, we kept looking at each other out of the corner of our eyes. There was a shared sense of recognition and the desperate hope we could melt into the atmosphere, hoping we weren’t really seeing each other and ostensibly leave the event unscathed. 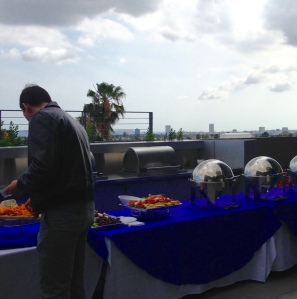 INGREDIENTS:
Your favorite in-season tomato
Fresh basil
Fresh mozzarella from the deli. (I go to Monte Carlo in Burbank)
(If can’t get to store that has it, Bel Gioioso has packaged cheese that has a wonderful flavor and texture.)
Olive oil
Nice balsamic vinegar

STEP-BY-STEP DIRECTIONS
Rather than topping your salad with oil and vinegar, Drizzle olive oil and balsamic on plate. It will give your presentation a cleaner look. (For a bigger presentation factor, I like breaking out a plate/bowl.) 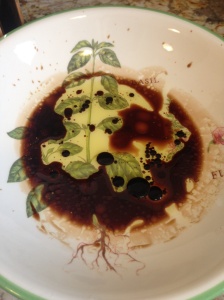 Arrange with tomato, basil and mozzerella. 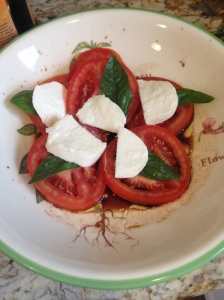 Top with more olive oil and cracked pepper. I provide my guests a small carafe of oil and vinegar so they can top how they like, but they got to see the nice presentation.
INSIDER’S TIP:
If tomatoes taste more like cardboard than tomatoes,  you can add a little salt to bring out the tomato flavor.

The outward expression of an inward grace.