I started senior year of college mainly feeling adrift. This lasted several months and was in large part due to spending so much time with Comicbook Crook the previous year. This resulted in a rift between many friends and me. I did manage to maintain TV production friendships, and like camp I was forced to be more outgoing. I could do this for meetings, but being inherently shy, I had to step into a more gregarious version of the camp me for social situations. Comicbook Crook had done a great job providing recorded criticism, so being a more confident me was not as easy as it sounds. Nonetheless, the modicum of confidence I had, enabled me to talk with my crushes.

There was the Canadian in my Public Relations class. . .
. . . and the tall one in my comedy class with the email: AmishDanceBeats
Then, there was the one from the TV studios. I loved that he knew the etymology of the ¾ inch tape. (It was ¾ inches wide.)

(This list sounds more glamorous when read in a Audrey Hepburn/Julia Ormond Sabrina voice. Further, I still can’t believe I was enamored with etymology of the ¾ inch tape.)

All these guys could potentially be THE ONE. And, because of this potential future they all possessed, even with my shaky inner monologue, I was feeling pretty good.

It was a crisp October afternoon, when I was walking through Boston Common to my Public Relations class on Comm Ave. I was rockin’ the L.L. Bean backpack/dark glasses look. I loved the class, plus I was going to see the cute Canadian (who I had yet to figure out was gay because he hadn’t shown me pictures of his ex-boyfriend). 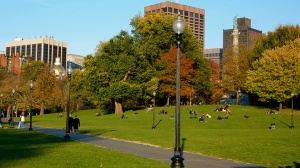 Someone was talking over my shoulder, but this is a city, people are always talking.

I was in my own world.

I turned to the voice.

His English wasn’t so good, but we managed. He introduced himself as Guapo and commented how pretty I was.

He told me that he doesn’t make it to the city often and needed directions to get back to the Orange Line. (I rarely took the Orange Line and was flummoxed that he thought I was pretty. I gave him directions, but I’m not sure how accurate they were.) Then it hit, me, if he thinks I’m pretty now, what if I took my glasses off and showed him my green eyes! I’ve received many complements on them, so I lowered my dark glasses and flased a smile.

We set up a dinner date for Friday at California Pizza Kitchen. It was convenient for me and I still thought he lived close by.

We sat in the crowded restaurant, staring at our menus and made small talk.

I don’t remember his English being this poor.

In my rudimentary conversational Spanish, I learned he was originally from El Salvador and moved to Somerville, MA with his mom, grandma and sisters.

The waitress came by. She gave her waitress spiel. Guapo gave her blank stare. Clearly, he didn’t understand. I translated in my crude Connecticut high school Spanish and continued to interpret between the two for the remainder of the evening. We eventually ordered our personal pizzas. He got barbeque chicken and I ordered their Mexican Pizza. (Hey, I was trying to be inclusive. This was the closest thing they had to El Salvadorian food. I’d later learn more “traditional” Mexican pizzas resemble a flat taco.) 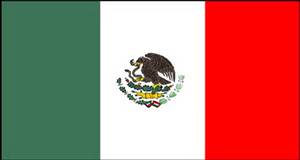 Despite our difficulty to have intellectually riveting conversation, the date wasn’t completely bad. Mainly, I was excited I had a date with someone who actually liked the way I looked rather than pointing out my imperfections the way my rapist did. We made plans to see each other again.

Our second date Guapo came over to watch a movie. My shared suite had a common room, but we opted for more privacy. I took Guapo into my bedroom to watch 10 Things I Hate About You. 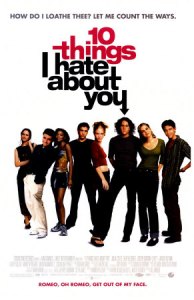 I love Romantic-Comedies s and really wanted to see how Shakespeare’s Taming of the Shrew was adapted to film. I spent more time fending off advances than watching the movie. The kissing was okay, but between his grabbyness and his tongue ring, it too much for my inexperience. As we got closer, I felt something I had never felt before.

One of his front teeth was outlined with gold!

I guess it’s a cultural thing.

Friends have since corrected me, “No, it’s a player thing.”

For a number of years I blamed myself for Guapo mauling me, rationalizing, “I guess some people take ‘watch a movie’ as a euphemism for ‘get busy.’” Now, I’d just say he is an asshole.

That afternoon, I was way in over my head. When I realized Guapo’s motives, I should’ve escorted him out of the dorm immediately, but being polite and naïve, I wasn’t sure how to navigate this. I wanted everything to stop. I hated the situation I was in and did the best I could to readjust my expectations of him and add barriers to prevent sex.

Somewhere in the middle of the movie, I heard the suite door open. SuperFoods said hello to an empty room and I eagerly ran to greet her. Guapo followed. The three of us talked for a bit. I’m sure she could tell my discomfort. I pointed out it was late, I needed to do school work and SuperFoods and I had dinner plans that night. I walked Guapo downstairs and signed him out.

When I came back, SuperFoods asked what I was doing with Guapo. Growing up in a city and with more experience of reading people, she probably saw the predatory aspect that I didn’t see. My parents taught my sister and me to love everyone. And I believed everyone deserved a chance at love. Somewhere, I forgot the caveat, “don’t give love to a loser.”

That afternoon was the last time I saw Guapo and I was glad for it. The next time he came to the city and tried to make plans with me, I was busy. I think I was washing my hair.

MEXICAN PIZZA
As I prepared the meal, I realized that this was likely the inspiration for another culturally insensitive meal, “Latin Fusion Pasta.” 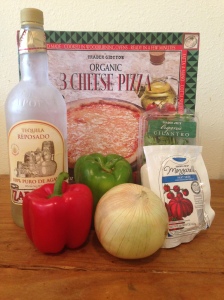 **Ideally, you would add cilantro as soon as the pizza comes out of the oven so it sinks into the cheese. Cilantro is a divisive herb. (Some people think it taste like soap.) If you’re unsure of your guests, put the cilantro in a separate dish, and let them add it themselves. 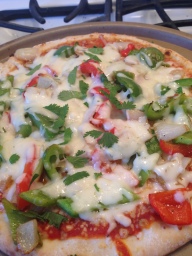 MEXICAN PIZZA: Red, white and green, like the Mexican flag AND it has tequila! (A close fascimile to what I had at CPK.) Yes, I realize the racism.

Musings on life and society